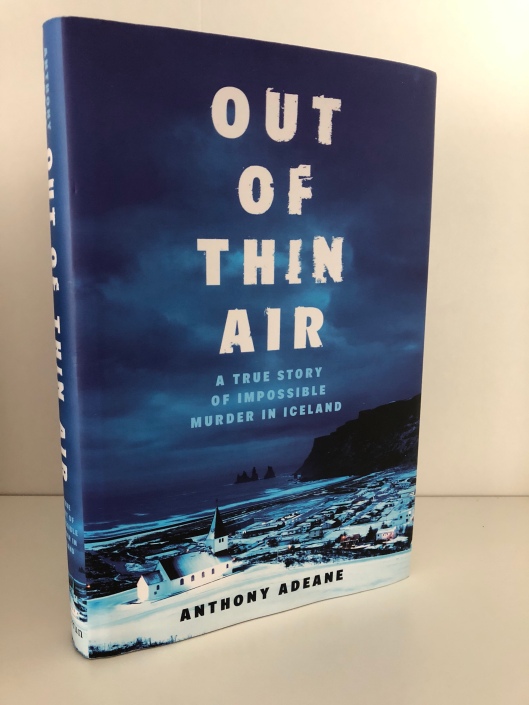 In the 1970’s two men disappeared in entirely separate incidents in Iceland.  Gudmundar Einarsson was 18 and vanished on his way home from a nightclub in early 1974.  Geirfinnur Einarsson disappeared in November 1974.  He had gone out late at night in his car to meet someone having received a phone call that his son had answered.  Geirfinnur’s car was found the next day with the keys still in the ignition.  Neither man was ever seen again.

In December 1975 Erla Bolladottir and her boyfriend Saevar Ciesielski were arrested on suspicion of embezzlement charges.  Their detention soon evolved into them being questioned about the murders of Gudmundar and Geirfinnur.  Over the coming years many men were arrested on suspicion of the murders, ultimately 6 people, including Erla, were charged based on confession evidence.   They were sentenced to substantial periods of imprisonment, Saevar to the longest sentence handed down in Icelandic history.

This book gives a detailed account of the authors quest to make a documentary about what has ultimately become a tragic miscarriage of justice.

I picked this book up on a whim in Waterstones, probably because of the title as I was reading Jon Krakauers’ Into Thin Air at the time.  I hadn’t heard of these Icelandic murders before but the cover piqued my interest and I finally got round to reading it over the last few days.  I am so glad I did.  What a truly fascinating book!  I really enjoyed how much I learned about Iceland through reading it, let alone trying to understand the shocking murder investigation that was carried out.  Six people were sentenced to lengthy terms of imprisonment based solely on, clearly, unreliable confession evidence.  As many of you know I spent many years as a detective investigating murders and I am fortunate enough to have worked in an era where the character of the detective is of no consequence and the obtaining of a confession is the last thing any decent investigator cares about.  What matters these days is evidence and confessions are just too unreliable, for all the reasons they are made, to ever be the sole basis for a prosecution.  But as we know from the UK’s own history our justice system had to deal with miscarriages of justice to reach this point.  Most do.

This book cleverly explained the context of Icelandic history to assist with understanding why certain things were happening, the effects that having a USA base on the island had during and after the Second World War, the economic problems faced during the Cod Wars but then the impact of the banks collapse.  Iceland was always a fairly closed community and murders were incredibly rare so when these two men disappeared the police weren’t really up to a proper investigation and clearly just relied on the confessions and not corroborating them.  When it became clear that the police were struggling, though already up to their necks in it, a West German recently retired investigator was drafted in.  Not remotely experienced in murder investigations but nevertheless a man that was held in awe by the investigation team and the press.  Little that he did was questioned.  He came in and tidied the case up, neatly explaining what he felt had happened, resulting in the conviction of the six.

Saevar briefly confessed during the interrogations, for reasons that are clearly explained, but ultimately tried everything he could to let anyone know that he was innocent.  No one ever listened.  He fought and fought and ultimately destroyed his life in doing so.  The author was able to provide fascinating detail about the research around solitary confinement – these suspects were held in such conditions for hundreds and hundreds of days, and thereby give valid reasons as to why on earth people would confess.

Ultimately many lives were destroyed by the investigations / interrogations and the aftermath and effects continue to this day.   In such a tiny community with few murders the subject of the disappearances of the two men was very much a talking point in Iceland and remains so.  Apparently in Iceland if three people know, everyone does.

This book is a proper 5 * highly recommended read for me, particularly if you like true crime, which I know many of you do.  It is really well researched and presented and I personally felt terribly frustrated for these people and their families.  The author gained first hand access to many of those involved and interviewed them over many years.  The only complaint I had was the lack of pictures!  I would have been interested to see what everyone looked like but I am given to understand that the documentary was made and is out there somewhere so I am off to find it!

One of the best books I’ve read this year, really interesting.  Tell me this, was a murder ever proved?